Like our work? Arrange a meeting with us at our office, We'll be happy to work with you!

We are always looking for new talents and we were expecting you. Time to apply, buddy!

Set in curtailige of the impressive classical Georgian Church, the existing cafe building was built in the in early 2000s and now lies unused. Although modest, there seems to be a deliberate connection with its classical context – the symmetry and reveals of the doors, the protruding eves and roof structure, the use of London stock brick. Despite these positive points, in its current form it remains a little underwhelming. Various elements which have been added over time further detract from the building – the timber deck service hatch, the stainless steel mesh against the external walls, the heavy duty extraction chimney, the stone gabions. There is also large grass area which seems to be underutilised and an easy gain for the uses within the building to spill outside.

Early on in the design process during our discussions with the client we developed the concept of the “pavilion/ cafe” as a gatehouse to the main church – to establish a subtle but strong connection between the great classical, imposing church building and the small pavilion that stands at perhaps the key pedestrian access point to the site. However, rather than just a pastiche copy of Georgian architecture we concentrated instead on the use of often simple shapes which are used in this style to create such strong buildings and such a defined typology – for example the semi circles in the extruded porches and entrances, the triangular shapes of the roof structures, the arched lintels etc of the Church building. To create this stylistic and visual link we sought to include some of these elements in the more modest and modern outbuilding/ pavilion/ gatehouse.

During the day it is intended that the south facade opens up (much like at present) to create a service hatch. The existing door closest to the service hatch is to become a fixed panel – in the same powder coated plate steel as the other doors so the external symmetry is retained. The awnings fold down to create a sheltered space directly outside the key access points. The flower stall benches are to be populated and stools set outside at the cafe benches and tables and chairs on the deck. Due to it’s secluded context away from the main roads, at night the cafe can be completely sealed. The two strong pivot steel doors along the west elevation closes, the steel shutters close off the service hatch and the retained window roll down shutters will secure the x3 windows on the western elevation. With the use of a winch the steel plate metal awnings fits back flush with the eves. The robust concrete benches are to stay in place, with additional fixings to the ground surface (if required).

The general layout and the design of the internal cabinetry has been carefully considered so that the space can accommodate a range of different uses beyond it’s main function as a cafe/ shop/ market stall – as detailed in the brief. The elements that are either plumbed in or are too heavy/dangerous to move (the sinks, cash registers, fridge, and coffee machine) have all been positioned around the perimeter so that they may stay in place. The two worktops and storage units that protrude into the space are both on castors so that they can be easily moved and they have both been designed and portioned to allow them to easily slot in around the perimeter if required – as in the plans above. 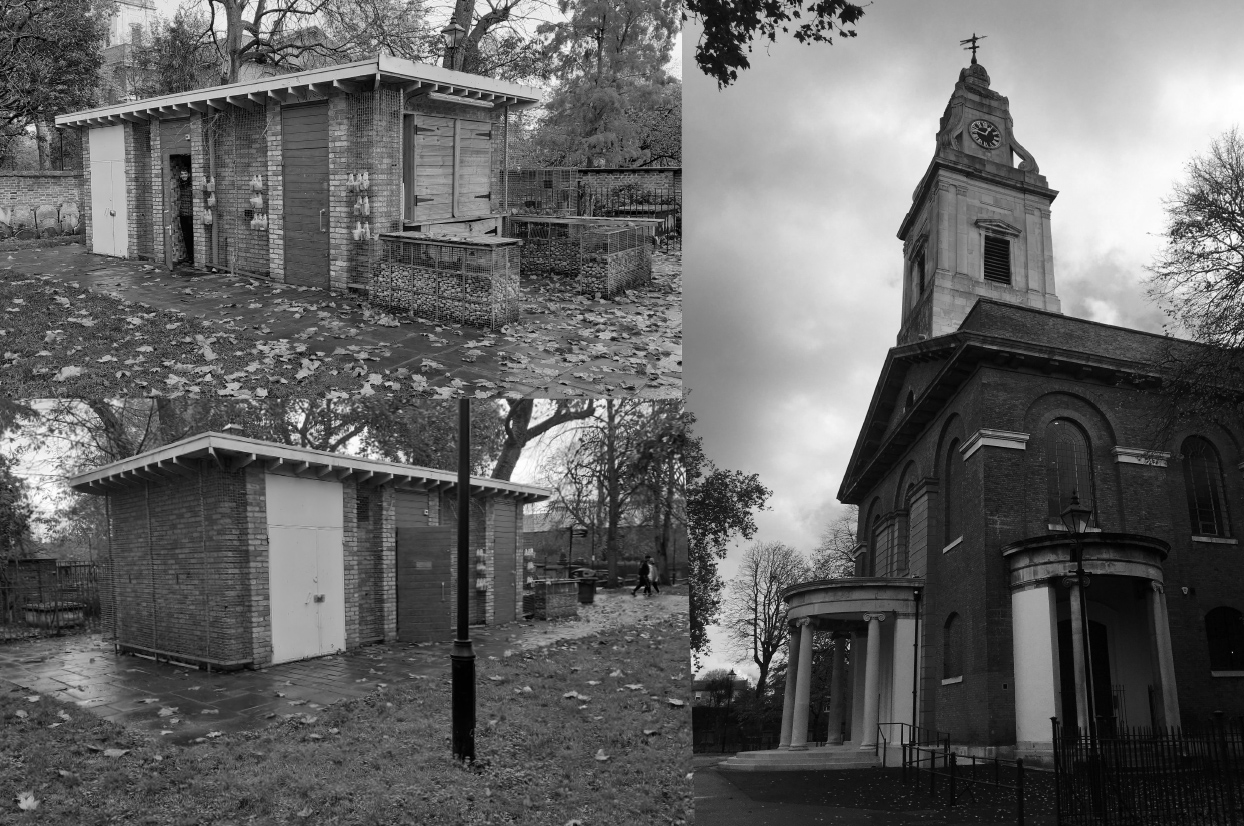 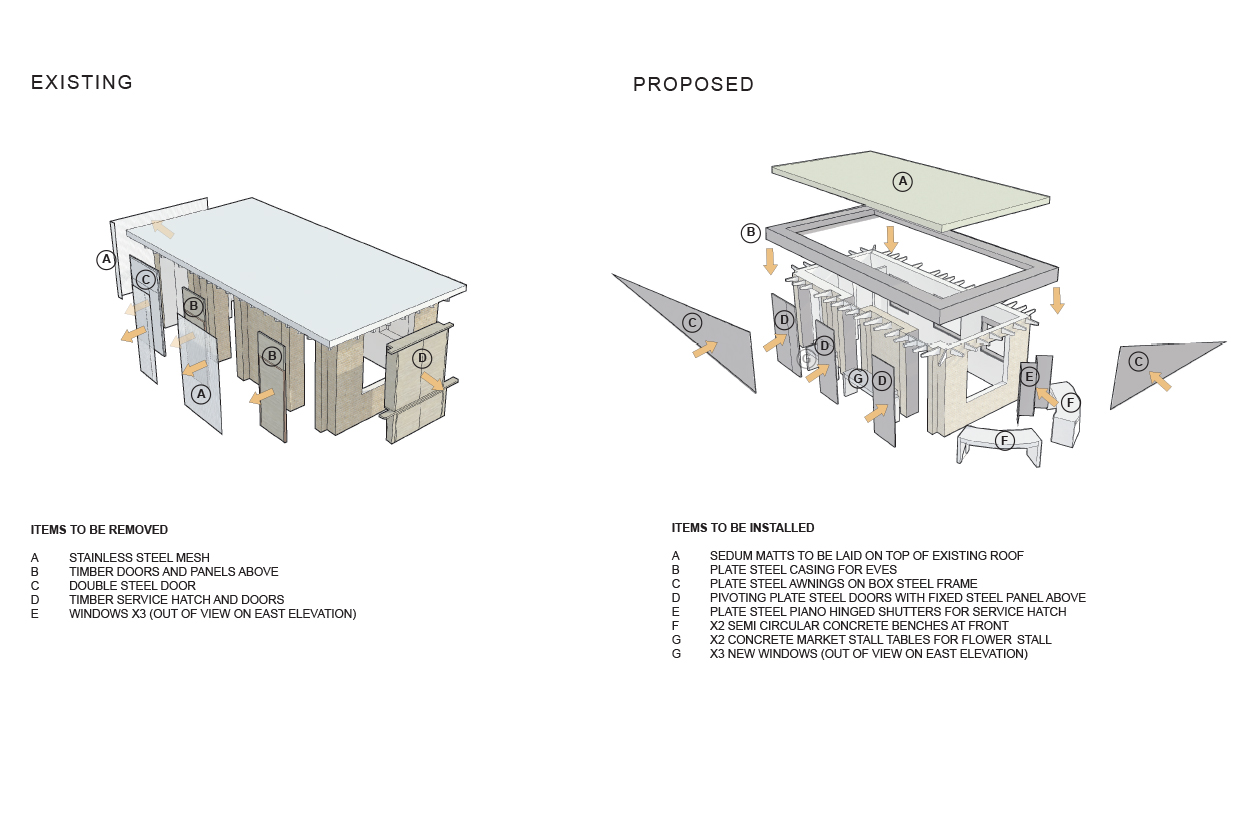 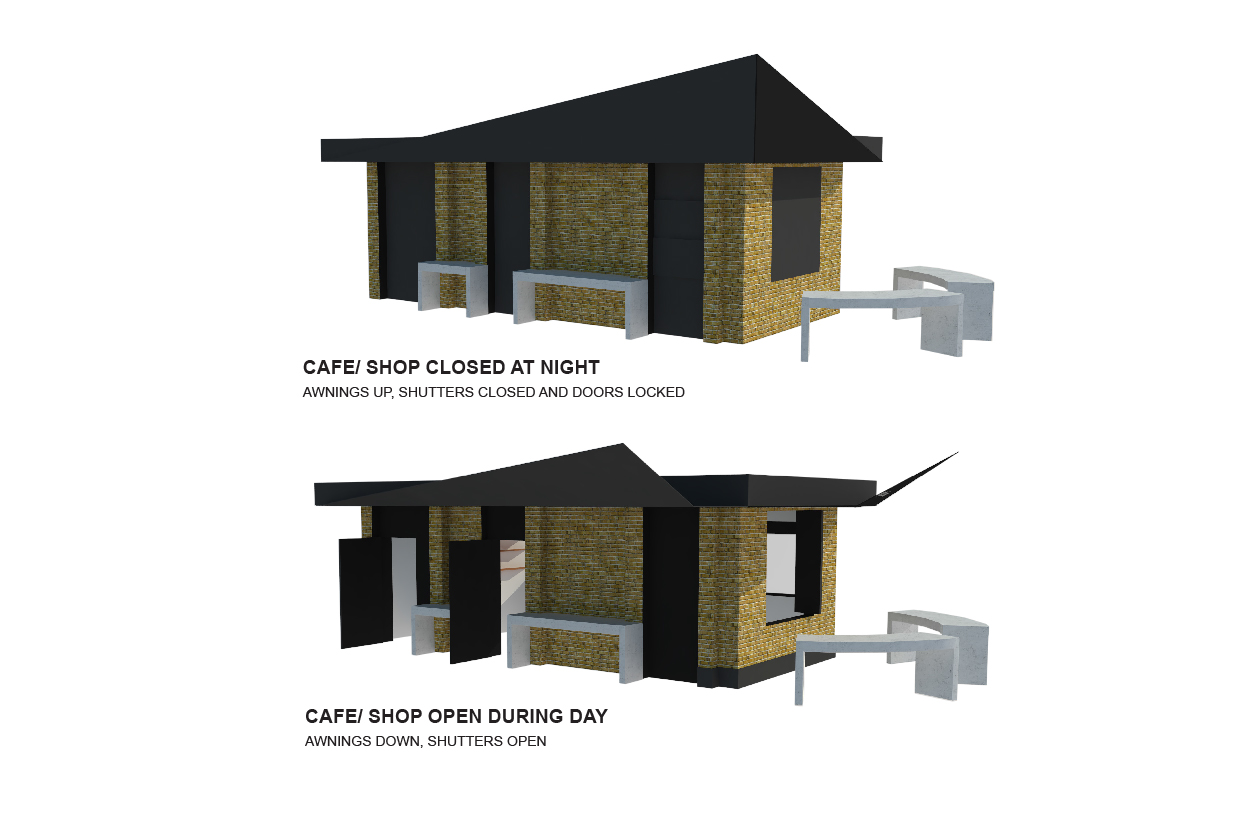 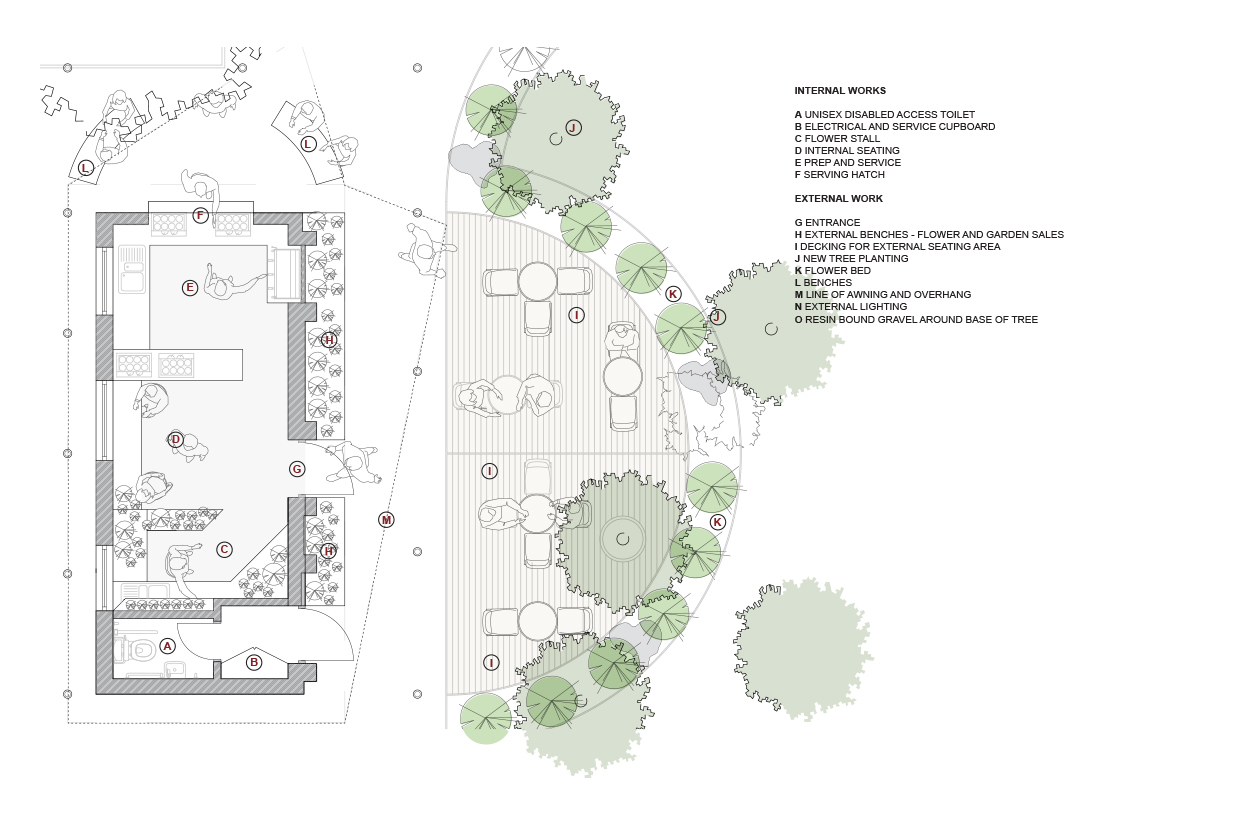 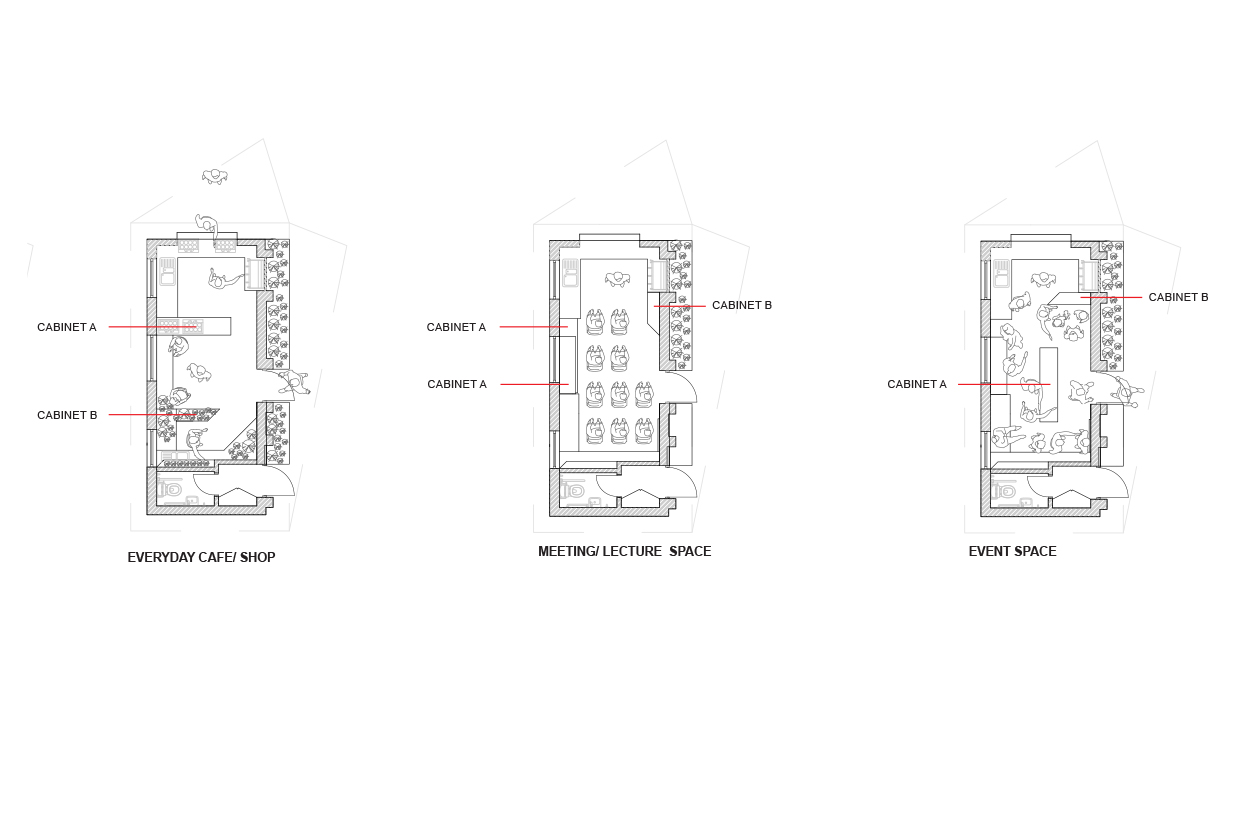 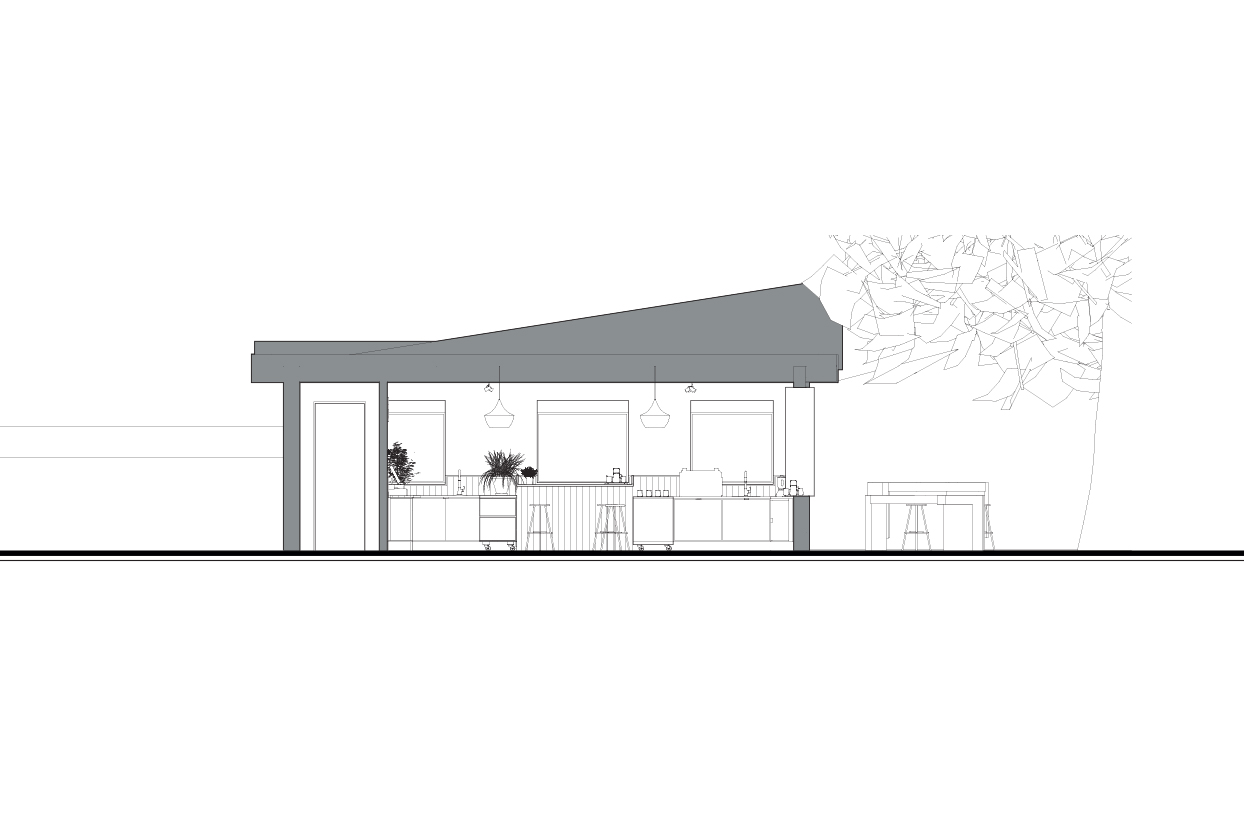 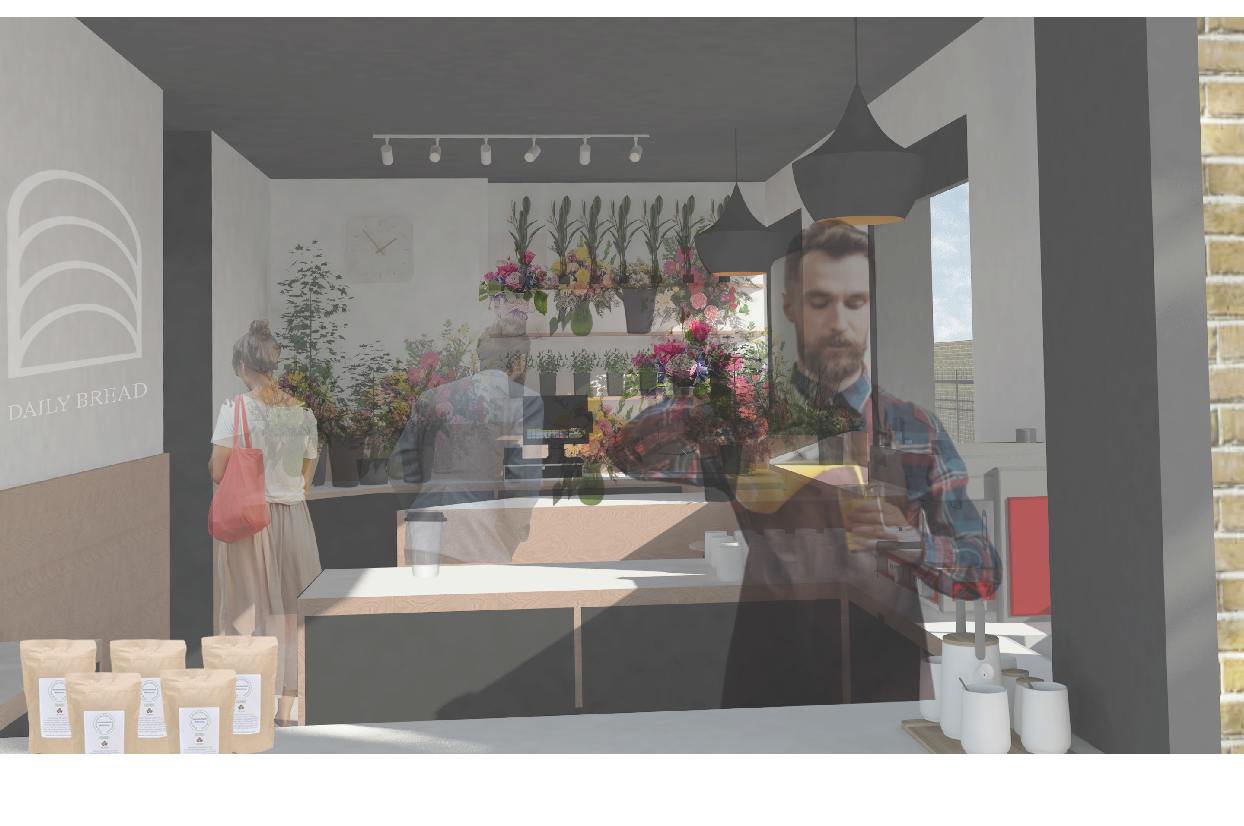 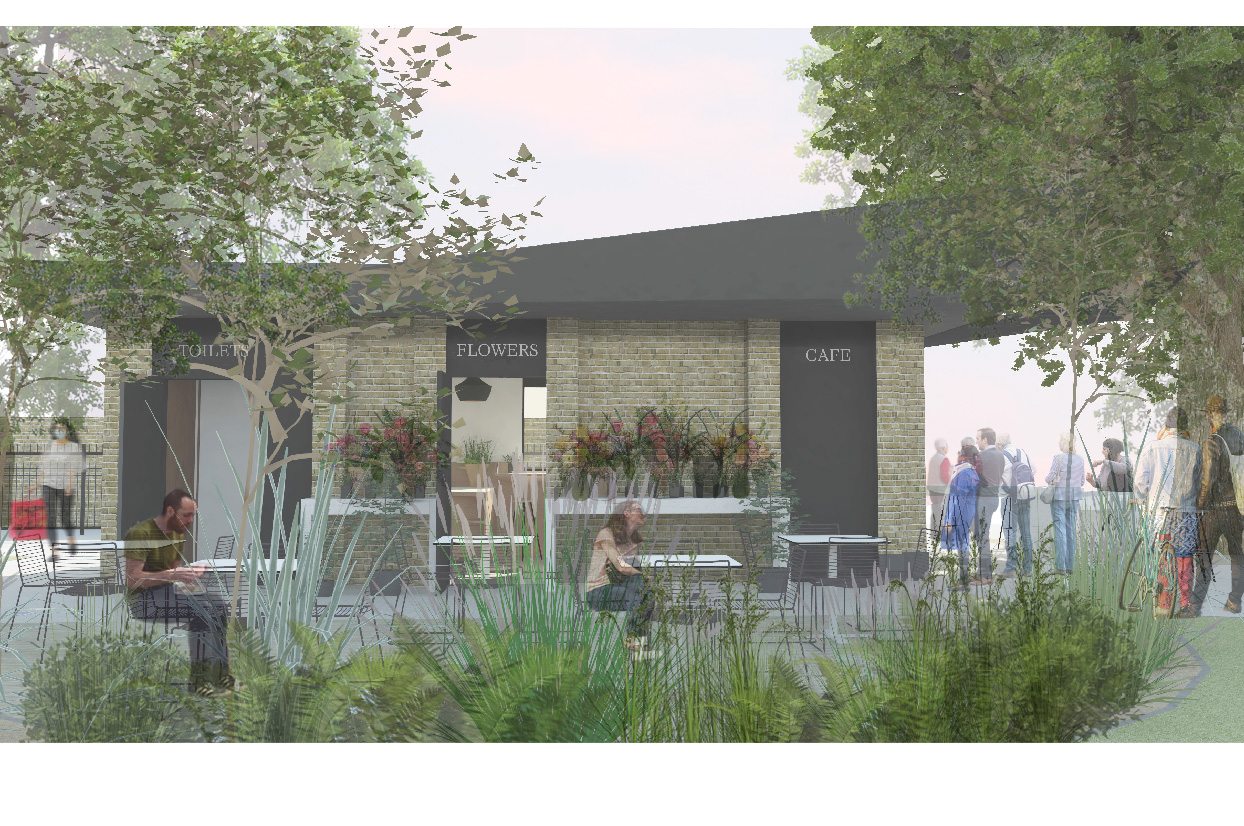